Spirit Goes Here
The evolution of the nickname “Hilltoppers” is obvious to those who have seen the Western Kentucky University campus.

In 1939, Coach Ted Hornback, Head of the Department of Physical Education & Athletics as well as an assistant basketball coach, organized a dinner meeting for alumni letterwinners at the Helm Hotel on the corner of State and Main Street in Bowling Green following the Homecoming football game. Those dinners became annual events following the afternoon homecoming games which gave former student-athletes and letterwinners an opportunity to revisit the Hill.

Mr. Hornback was elected secretary/treasurer of the Alumni W-Club at its first meetings. He served continuously as secretary/treasurer until he was succeeded in 1971 by Mr. Lawrence (Butch) Gilbert. The annual meeting of the membership was moved to the E.A. Diddle Arena Lobby and E.B. Stansbury Concourse after the opening of that facility in 1963. At that time the dinner meeting was changed to a brunch.

Western Kentucky University’s unique “Red Towel” tradition originated with the late E.A. Diddle, one of the most successful coaches in history.

Through 1,062 Hilltopper basketball games, Diddle clutched a red towel. He chewed on it, threw it, cried on it, waved it at fans and used it to signal his players.

Though Mr Diddle has been identified primarily with Hilltopper basketball, he actually coached four different sports during his long and illustrious tenure on the Hill, including football, baseball, and women’s basketball. Overall, the four sports he coached were a combined 1,040-487-5 – that’s a 68 percent success ratio! 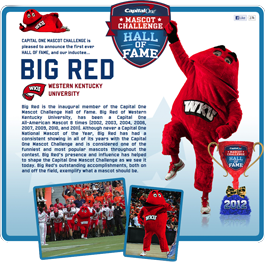 Big Red, Western Kentucky University’s athletic mascot, was born in the fall of 1979 and celebrates its birthday on December 1st.  Big Red can be best described as the Spirit of Western!

The huge, furry, lovable creature was originally designed and built by WKU student Ralph Carey, (’80 WKU graduate), of Cincinnati, and made its’ debut during the Hilltoppers’ 1979-80 basketball season.  Big Red has become a big hit with fans of all ages throughout the state and the nation.  Big Red’s signature moves are the belly slide and belly shake.

The ultimate fan and supporter of all WKU’s intercollegiate sports, Big Red won the “Key to Spirit” award, the highest honor presented to team mascots at the time, at the Universal Cheerleading Association competition in 1980, 1981 and again in 1983.

SEARCH THE HILLTOPPER HALL OF HISTORY